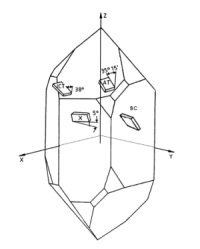 Piezoelectric materials, especially quartz , have the property to transform electrical energy into mechanical energy and vice versa. In technical applications this effect is utilised by applying an alternating electrical field, which will cause the material to vibrate and subsequently resonate mechanically. This electrical reaction permits usage as an electrical resonator with a very high figure of merit Q and a low temperature coefficient.

Different quartz crystal cuts can be made possessing different properties. Cuts are defined by two rotation angles phi and theta around the crystallographic axes. Most common cuts are the single rotation AT- cut ( phi = 0° ) and the double rotation SC-cut ( phi = 22° ) . The theta angle in both cases is around 34°. Other double rotated cuts like MSC-, IT-, FC-, LD- for special applications also exist. 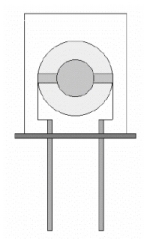 The active component of the crystal resonator is a mechanically vibrating plate ( "crystal element" ) cut from mono-crystalline quartz with a precise orientation to the crystallographic axes. The resonator is plated under high vacuum with aluminium, silver or gold electrodes and hermetically sealed into a suitable enclosure either with a coldweld or resistance weld process . The physical dimensions of the element and its orientation to the axes will determine in particular the resonance frequency, its initial accuracy, its electrical properties and the temperature coefficient. KVG produces AT- and SC-Cut crystals (and others), which are the most widely used cuts providing a frequency range from 800kHz up to 300MHz and excellent frequency-temperature characteristics.

The frequency of crystals is inversely proportional to the thickness of the element . For mechanical processing, this results in an upper frequency limit of about 50MHz for crystals operating on the fundamental mode. To reach higher frequencies in the fundamental mode KVG also produces chemically etched invertedmesa crystals where the central part of the resonator is etched to have a thickness of as low as ten microns.

Many different parameters have an influence on the final resonator properties. Thickness and diameter of the element , electrode diameter, electrode material but also holders, sealing method etc. Crystal elements can be manufactured plano-parallel or contoured ( with bevels, plano-convex or bi-convex ) . Contouring is necessary to prevent edge effects . A radius of curvature can be manufactured on one or both sides of the crystal element to trap the energy in the center of the resonator. Trapping can also be performed through mass loading.

High frequency crystals vibrate in the thicknessshear vibration, which can be excited in fundamental or odd overtone modes. The motional capacitance C1n of an overtonecrystal decreases with the order n of the overtone and is approximately given by C n C n 1 11 » 2 . Therefore the ratio CO/C1 is much larger for overtone crystals than for crystals operating in fundamental mode and the pulling range is reduced by a factor of approximately n3. Crystals used in VCXOs, where wide pulling range is required, therefore operate in fundamental mode.

All crystal resonators produce for each overtone a main mode which is a thickness shear vibration and also unwanted responses, which are inharmonic thickness shear modes above the resonance frequency. Besides the commonly used thickness shear C-mode another thickness shear mode named B-mode exsists. It has a higher frequency and commonly lower motional resistance than the C-mode but a larger temperature coefficient . Sometimes it becomes necessary to filter this mode for the oscillator to work on the C-mode. Further unwanted modes are shear-, flexure-, thickness- and twist vibrations, which can appear above and below the required resonance frequency. With correct oscillator design the unwanted modes rarely cause problems. Unwanted modes close to the resonance frequency affect the start up behaviour of oscillators, or cause shifting to the wrong frequency during operation. Other undesired effects are frequency and resistance dips over temperature caused by unwanted modes. Spurious modes are generally specified as the ratio of resonance resistance of the inharmonic modes to the main mode resistance. KVG must have detailed information about the test circuit (e.g. pi-network or measurement bridge) and about the frequency range of the spurious modes.

Figure 9 shows the response in amplitude and phase vs frequency around resonance. The resonance frequency is given by: 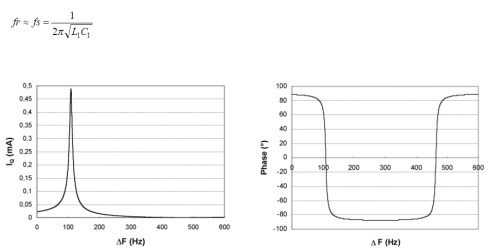